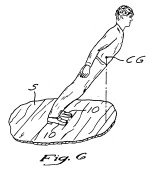 A post on the Greedy IP Board mentioned that Michael Jackson is a co-inventor of USPN 5,255,452 "Method and means for creating anti-gravity illusion." The first two pictures are from this patent.

I forwarded a copy of the patent to a magician friend of mine. He E-mailed me back making the following observation: "Interesting... I was catching up on my reading the other day, and in this 1981 magician's magazine, there was an article about Bert Easley, who had a "drunk" magic act in Vaudeville. I don't think the king of pop addressed this in prior art..." He's right, it isn't. The bottom picture is a scan of Easley's drawing of his magic act prop. More info on Easley's act can be found here.